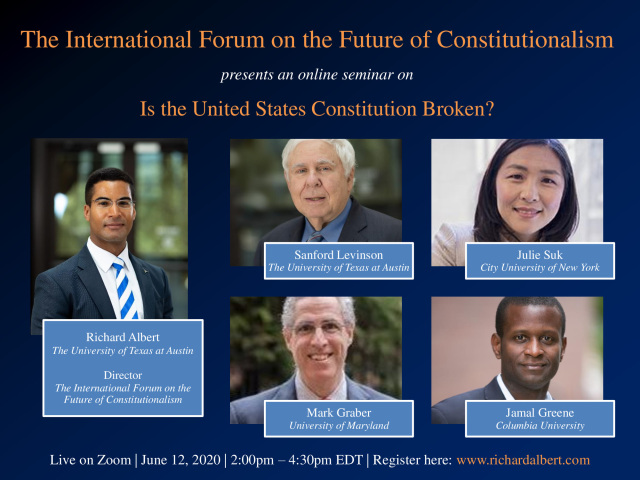 Is the United States Constitution Broken?

This seminar will raise a controversial question: Is the United States Constitution itself a cause of the problems that ail modern American democracy? Each of the speakers has in the past offered answers to this question. Some have taken competing views on the need for a new constitutional convention in the United States. Others have asked whether the Constitution's onerous amendment procedure is impeding good-faith attempts to make real the promise of equality in the Fourteenth Amendment, specifically with respect to the ratification of the arguably unratifiable Equal Rights Amendment. And others are currently engaged in a project to write a modern version of the Constitution, an effort to imagine what a Constitution written today would look like and what it would protect. These are some of the subjects to be canvassed in this seminar with these leading scholars in American constitutional law and politics:

This online seminar will be held live on Zoom on Friday, June 12, from 2:00pm EDT until 4:30pm EDT. This course is open to all, including faculty and students in law, government, history, world affairs, and other fields.