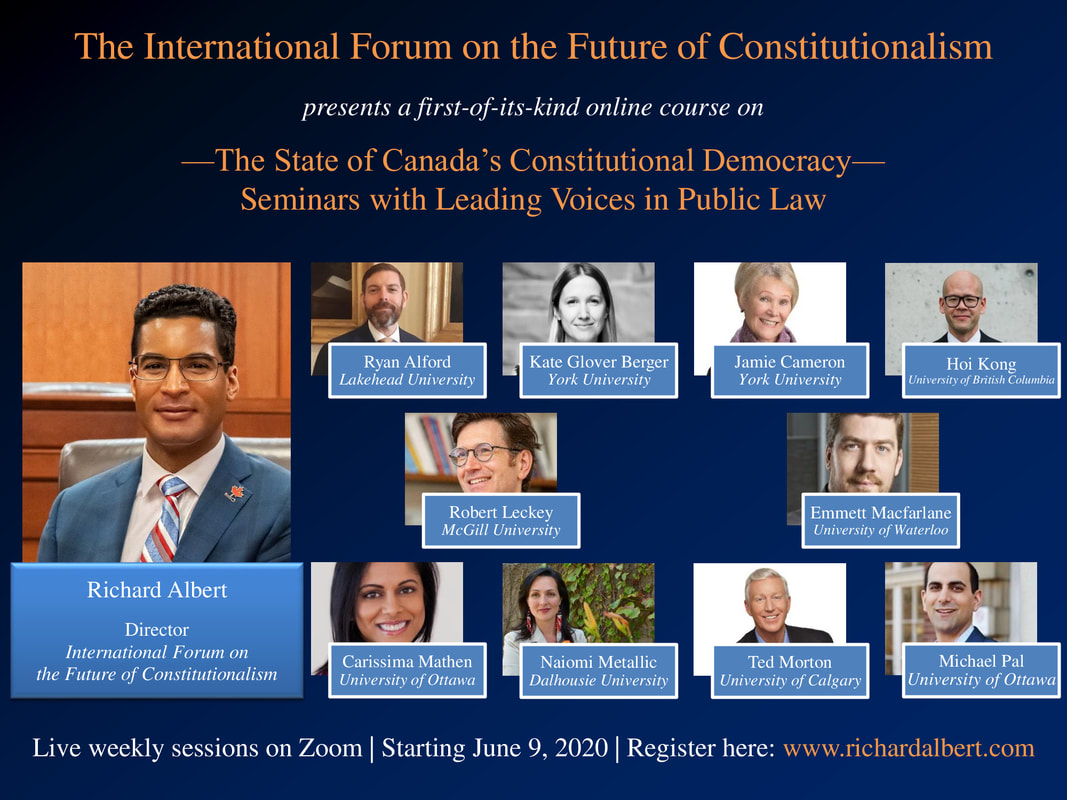 The International Forum on the Future of Constitutionalism presents a first-of-its-kind online course on "The State of Canada's Constitutional Democracy: Seminars with Leading Scholars in Public Law."

This course offers the unique opportunity to learn from and debate with leading scholars of public law in Canada on the current state of our constitutional democracy. Subjects scheduled for discussion include the ongoing path to reconciliation, the role and limits of federalism in managing the present public health emergency, the risks and benefits of social media in election campaigns, the history and reform of Supreme Court appointments, the threats to freedom of the press, the use and misuse of the Notwithstanding Clause, the scope of religious freedoms, the balance between civil liberties and national security, the role and functions of the Senate, the Alberta independence movement and the future of Confederation, and the essential features of the administrative state in Canada.

Directed by Richard Albert, this ten-week course will be held live on Zoom on Tuesdays starting on June 9, 2020. Sessions will begin at 2pm EDT and end at 3:30pm EDT. Richard Albert will preside over every session. Each session will begin with a live presentation delivered by a featured scholar on a subject of her expertise. The remainder of the time will be reserved for discussion between course registrants and the featured scholar. Readings may be circulated in advance for specific sessions.

The roster of distinguished faculty for this course on "The State of Canada's Constitutional Democracy" follows below, with the biographical information and subject-matter focus for each.


This course is open to all, including but not limited to lawyers, journalists, activists, non-profit leaders, as well as faculty and students in law, government, history, world affairs, and other fields.

The deadline to register is Thursday, June 4, 2020. The modest proceeds from this course will be used to cover some of the expenses incurred in developing this course and also to fund bursaries for elementary, secondary, and post-secondary school students in Canada and Haiti.